skip to main | skip to sidebar

A Pet Kraken: Best. Idea. Ever.

I was never allowed to get a pet when I was kid, the last time I recall asking for a pet, I got a younger sister. I did eventually get a turtle but alas, I was allergic. FML Indeed.

I was thinking, what would be my ideal pet and if there were no limitations (like practicality and existence), I'd go with a pet Kraken , even though a pet Raptor  (they have such cute hands...perfect for the Wii Controller), a regal Basilisk  or maybe even a nifty Cyclops  were all close contenders. Now back to my Pet Kraken, I'd call him Krako for short.

"The Giant Kraken is a very rare, very unseen sea-creature ít 8 gigantic tentacles. The only way they have been found is dead, washed up upon the banks of the seas. These massive creatures are one of the most dangerous, largest, and still unknown about creatures within Caelereth. With their strength they can even tear whole ships apart." (Damn Straight).

Many would question my sanity and ask, why a Pet Kraken? Wouldn't a talking Dog suffice, and I say no. Krakens are bloody useful, particularly in Karachi.

Firstly, I live 5-10 minutes from the ocean, so feeding and lodging would hardly be a concern. Screw the fisherman that fish those waters, they'd be Krako's personal dessert. Krako would also have to develop a very strong stomach to deal with the toxic water, but hey, he loves me, so it's all good. What is love compared to a little indigestion. Husbands all over the world have been accepting their wifes cooking no matter how badly it effects their digestion system. Krako would be a peach about it. Now that's Pet Love. 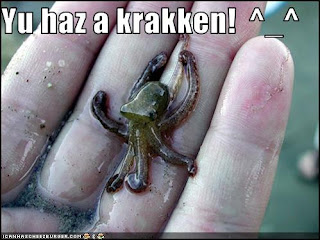 It'll perform some really rad tricks. None of this roll over crap, Krako will be well versed in the art of Juggling (boats), Torture (Taliban) and even water gymnastics (he can do an awesome Swan Impression). He'll even do a mean Al Pacino impression.


It'll totally impress chicks. Like completely. How hot would I become if I could have my pet Kraken snare us a couple of Lobsters and Sea Bass for a romantic dinner on the beach. Or I could play tough man and pretend it fight him.... 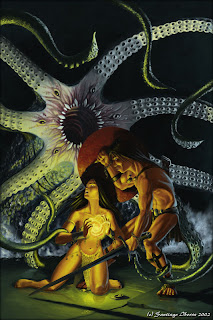 Safety: I don't foresee any mob/political party/peeved on fund Investor being able to take on little Krako. Unless they really want to be cataloged as 'dinner'.

He'll live For-Ever. How cool would it be to have a pet which you can perpetually hand down to your kids? You know that they'll be taken care off...what more do you want as a responsible caring adult?...other than a vault of Gold of course (dollar depreciation is a bitch).

We'd also do some really fun charity things like protecting aid bearing flotillas. Eat that Israeli government. Just try to interfere and Krako'll eat you....even if it gives him indigestions, have I mentioned how damn loyal he'll be? 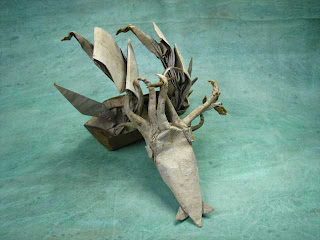 I would also be able to scream 'Release the Kraken' without sounding like an idiot. And how big a hero would I be if I savedf cities around the world from destructive Tsunami's and Phet like hurricanes. For cheap publicity I'd even down a few Indian Battle Cruisers....just kidding. I'd be a hero....and so would Krako. Babes, Book Deals and Toy Royalties Galore. 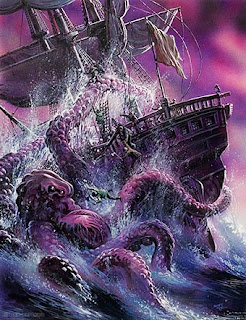 What do we seek from pets? Loyalty, fun, companionship, someone whose always glad to see us when we get home. Pets are great and the best pets love unconditionally. Odds are they'll be your longest relationship...well atleast in some countries. Everyone should have their own version of Krako.

Haha.Nice.
Tell us when you get one and then we'll call you Davy Jones ;)

Hmm, it's odd wanting a pet that the Palestinian Authority considers an essential part of their National Defense Systems.

Well then...we know who to call, don't we? Calypso!

Exactly ;) plus they don't die so easily. Your Krako's killable...(no offense!)

That. Was. Terrible. Unfunny, poorly written, sad attempt at being funny. Please stop. Cease and desist from spreading your vile brand of (what you can only loosely refer to as)humor.

Stick to being quietly unpretty in a corner as life meant you to.

@ anon: Amazing that a post on the Kraken elicited such a strong response; Pathetic much?

Regardless, Thank you for your wonderful well crafted insight. Your argumentation may have been utterly lacking in substance but as any form rudimentary reasoning is obviously beyond you, I can't hold you accountable for being stupid.

But fret not, I'm sure your Mother loves you.

It will be all slimy, how will you manage to pet it or hug it?

Yeah but your idea of having fun is indeed very impressive!

@ C: I wouldn't need to hug Krako, we'll high five each other. Like bros. Much more respect.

I'll get him some killer moisturizer if I really need to hug him.

WoooH! You picked up a critic, apart from me that is! How exciting is that? Fairly full on in his(?) dislike of both your substance and your style. How funny! By the way, I have it on very good authority that the stench given off by a kraken is killer! So if his power doesn't overwhelm you, his odour will. Rather than moisturiser you might consider deodorant of an industrial strength. Love, Alec

@ Alec: I wouldn't call him a critic, maybe a bit sad, but as I mention, his mental limitations are probably not his fault. I'm sure his Mommy thinks he's fantastic...the next Albert Einstein even.

You at least have the ability to elucidate your grievances and debate on substance. That I welcome and expect from a 'critic'.

Hmm, stench is an unconsidered issue. Industrial strength deodorant it is....unless I monetize it into some form of profitable Chemical Warfare. Krako-mite!

love how you have full control over those "critics". One of the best ideas ever, i to would love to have a kraken. surely enough that would be super wild sailing the seas with the kraken as your respected pet. love your text dude

@ Anon: haha, thanks. A Kraken for all! He'd be mighty useful on fishing trips.

Love the idea of a Krako, but my ideal pet is, Great Dane dog, don't know why, just love them.

Great way to handle a "critic", I think he doesn't understand what you wrote, he know how to read? Well it doesn't matter! LOL

Hope you're living a life you love, and loving the life your living!

@ Anon 'M': Great Danes are Rather Awesome,But it might be even awesome if it was a talking great Dane that could juggle.

haha, I try to be polite if a valid point is expressed.

Life if Good, thanks M!

I can throw open those garage doors, get back outside and get working on my garage full of furniture!! Gilbert Locksmith

About Me; Master of the Universe in Training

Alpha Za
Karachi, Sindh, Pakistan
Some people feel the rain, others just get wet. As for me...either ways, I don't bother owning a rain coat. Live the life you love, love the life you live....and make sure you have money saved up for therapy just in case.